Back Creek Junction and the line to Cowra, developments at Lambing Flat, 2012. 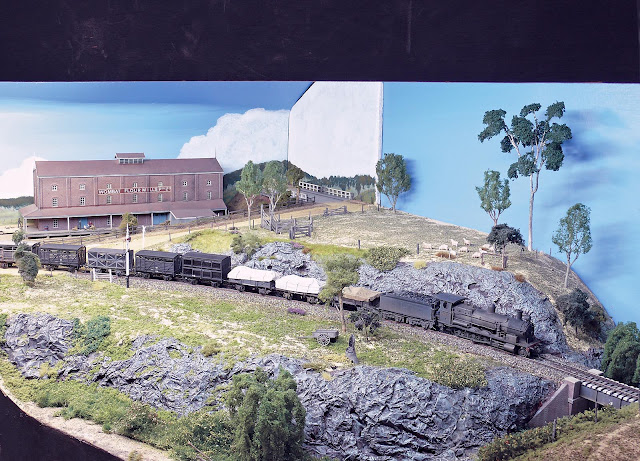 Once Lambing Flat was re-erected in its current home in 2003, other than maintenance and the addition of the occasional minor detail, nothing much changed, other than the addition of DCC and more rolling stock. The track plan was as shown below, very little changed from its Burwood manifestation, other the deletion of the 'south curve' due to its excessively tight (approx. 600mm radius) curve and substitution of a much shorter fiddle yard at that end.
﻿ 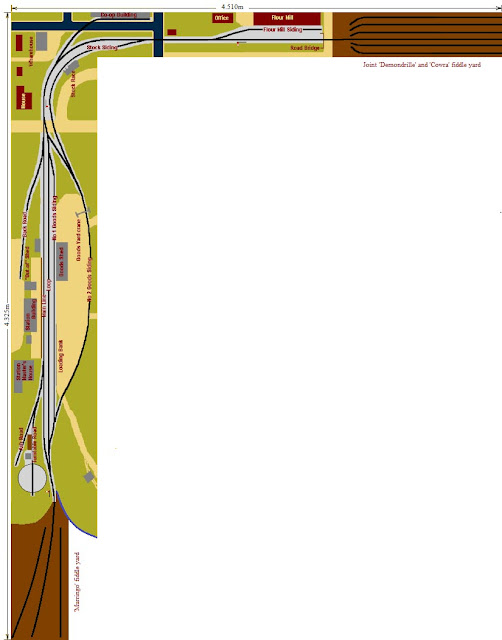 With this short fiddle yard (no more room in the garage that end) LF could no longer be operated as it was in Burwood, an intermediate through station, plus I wanted to have more happen in the station than just trains crossing and occasionally shunting the yard. I had always liked the operations carried out at Binnaway in NSW's north west where the main traffic on the Dubbo - Werris Creek line came in and exited the yard from the same end, while the branch traffic to and from Gwabegar passed through. I resolved that the main destinations for traffic on the line, 'Cowra' and 'Demondrille' would be the same fiddle yard, meaning that all trains moving between those points would have to reverse in the yard, while the small fiddle yard at the bottom would become the branchline terminus of 'Murringo'. This resulted in most traffic originating the large fiddle yard (at the top), running into the yard, reversing the brakevan and changing engines, then returning to the same fiddle yard (the junction was assumed to be 'beyond the layout'). Occasionally a 'pick-up' would run with traffic for Lambing Flat itself and would spend time shunting the yard and a (usually mixed) train would run 'through' to 'Murringo', connecting with a passenger train running on the 'cross-country' line. This operating pattern worked well for many years, but as more rolling stock was acquired the fiddle yard became very crowded, so I resolved to build a new fiddle yard and move the junction 'on stage', allowing a new scenic section to be constructed, some 20 years after the last extension of the layout (LF is a rural railway, things move slowly!)
The basic fiddle yard and baseboard was constructed and made operational in early 2011, but it took till the beginning of 2012 before any progress was made on the scenery. (With playing soccer during the winter and a certain magazine taking up most of my time and energy, progress on the layout can take some time...)
By 5 January 2012, this was the scene on the extension. 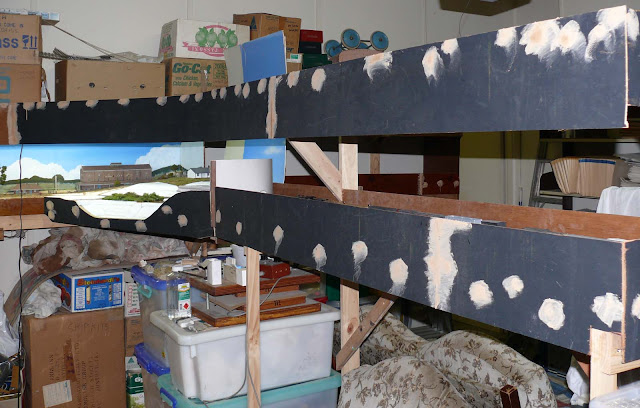 The shelf over the extension had been erected, profile boards fitted and a start made on constructing the scenery. The track plan now looked like this: 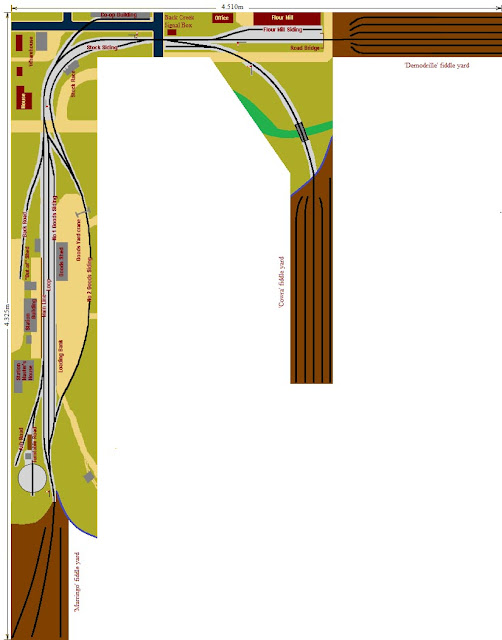 This photo shows a 'panoramic' view of the layout, showing how the new section fits in. 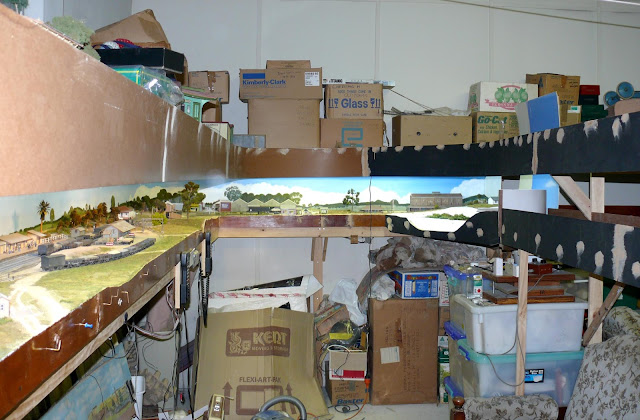 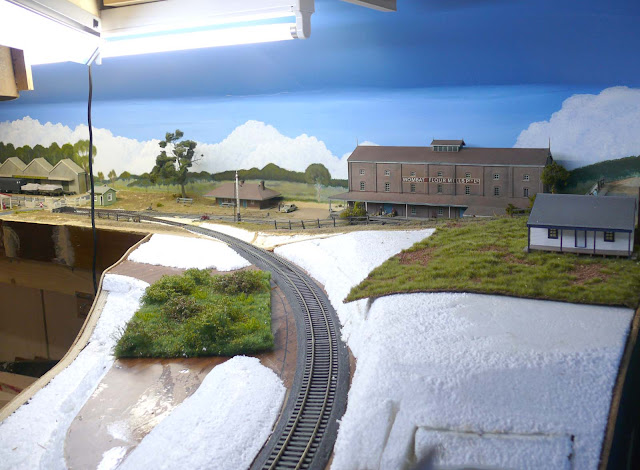 Scenery construction is quite conventional with carved styrofoam on a baseboard of particle board. 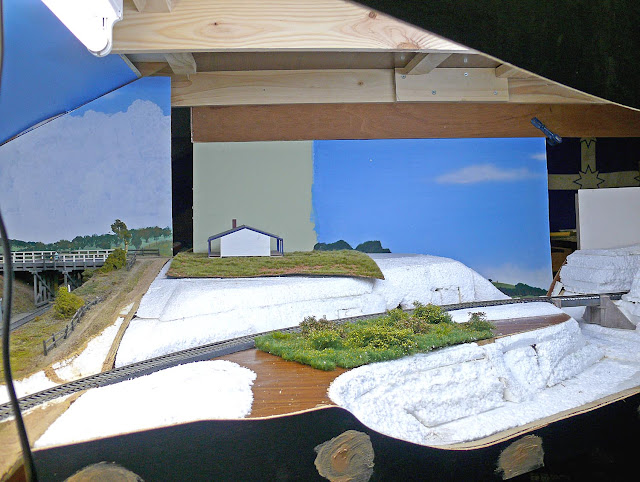 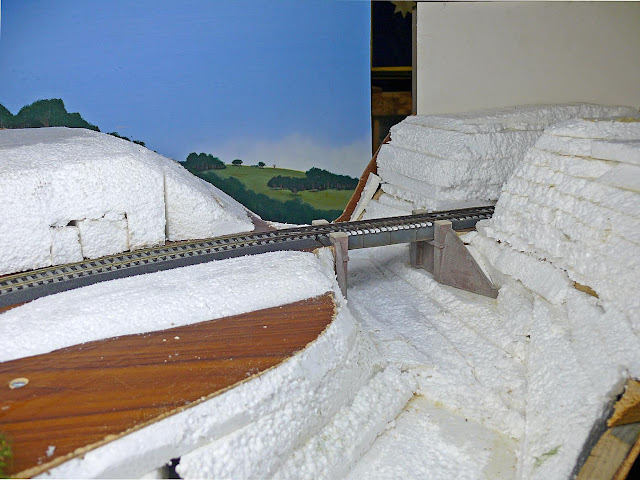 The concept of the new section is that the line has been cut alongside a creek, crosses the creek and then disappears into a rock cutting, which hides the entrance to the fiddle yard. The bridge is a Hawksmoor 'Large Railway Culvert' kit, obtained from Casula Hobbies (I reviewed it in AMRM Issue 285, December 2010).
This is the junction of the new line to the old layout, conveniently situated in the small extension I was able to make between the level crossing and the turnout to the mill when the layout was first re-erected in 2003. 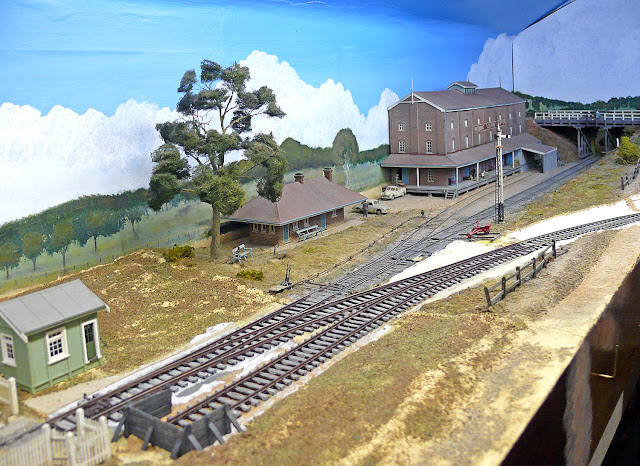 I'm getting too old and impatient to scratchbuild track these days, so the track is standard Peco code 75 'finescale'. The signal box is a temporary one, while the ash buffer stop is a Uneek whitemetal item.
By the next day (6 January) the 'ground' had been added by the conventional method of spreading plaster, tinted with powder colour, and the rock faces cast in plaster using the very traditional method of crumpling up aluminium foil and using it as a mould. 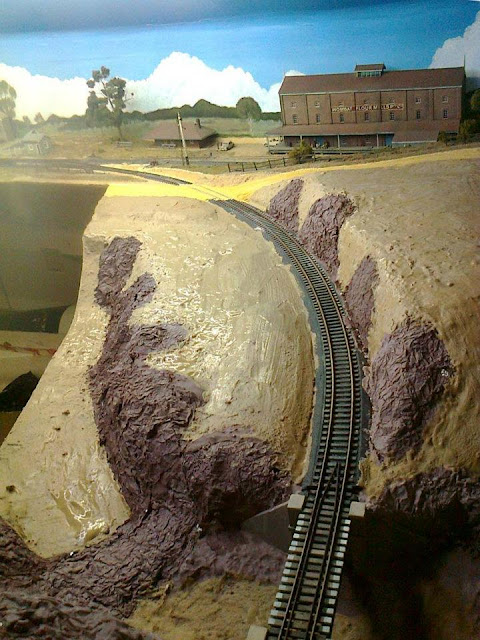 The four equally spaced and shaped rock faces along the cutting looked a little 'artificial' (I forgot the 'rule of evens') so after this photo was taken the cutting was altered.
By 9 February some progress had been made on painting the scenery, with the rock faces painted using artist's acrylics in an attempt to reproduce the 'look' of the rock outcrops visible just to the south of Cootamundra, a scene that had always fascinated me. 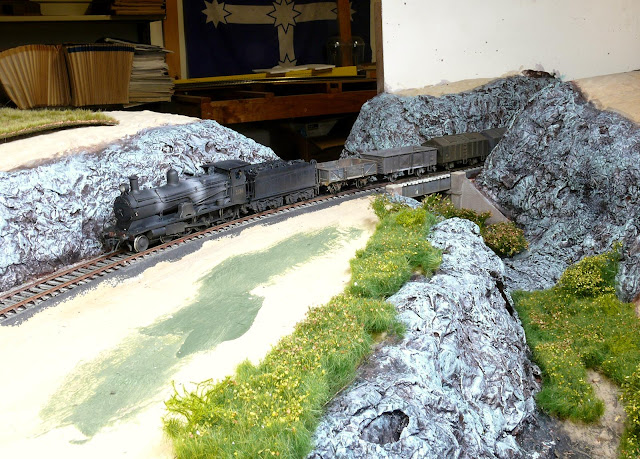 The rock faces, painted with a combination of artist's acrylic colours and various techniques of application in an attempt to evoke the prototype scene below. 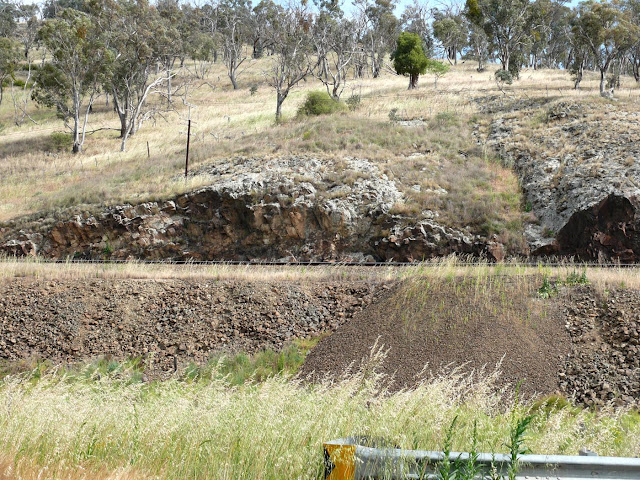 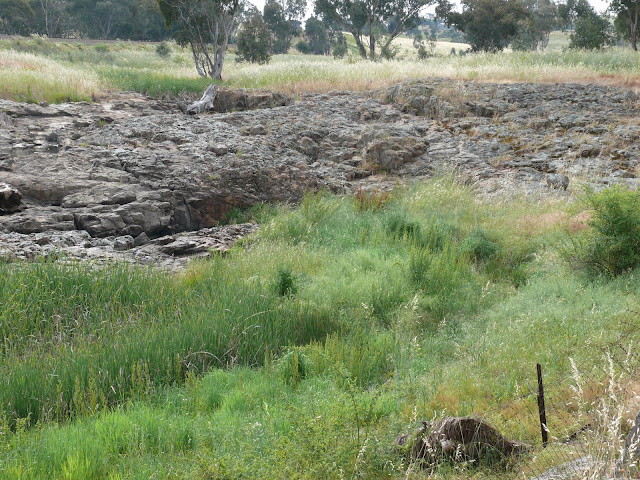 I haven't quite got the colour of the lichen right, but it is getting there! The level crossing detail is starting to appear with a Uneek stock guard and the level crossing signs (SJM kits) installed. 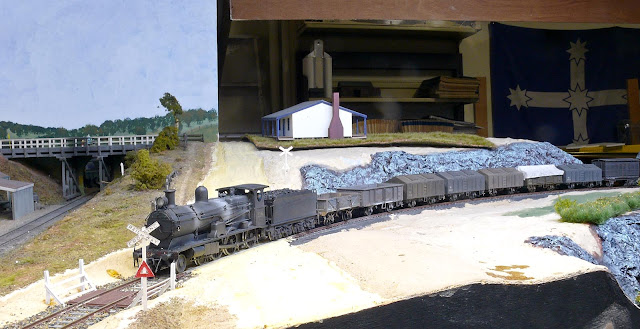 P class 3324 rolls towards the junction with a goods train, mainly consisting of RU wheat hoppers, on 9 February 2012. 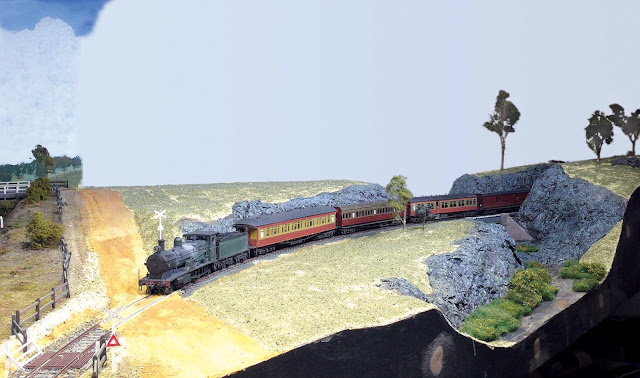 A couple of days later (11 February) and the first layer of ground cover had been added (dyed sawdust), a start made on the vegetation in the creek and the first trees starting to appear. 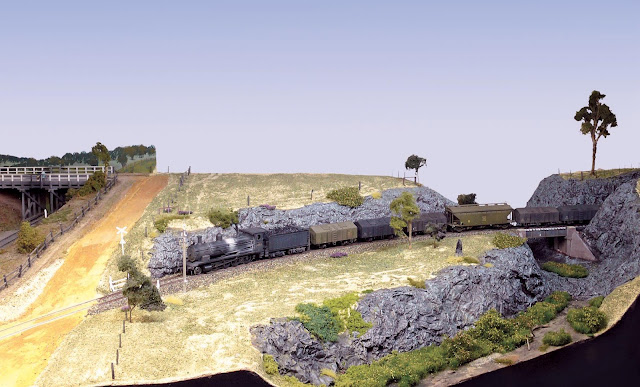 By 16 February the colours of the rocks had been 'adjusted', the fences were in and the detail such as trees, bushes, weeds etc. were starting to appear. The second stock guard (also Uneek) has been added and the beginnings of the home signal temporarily in place. 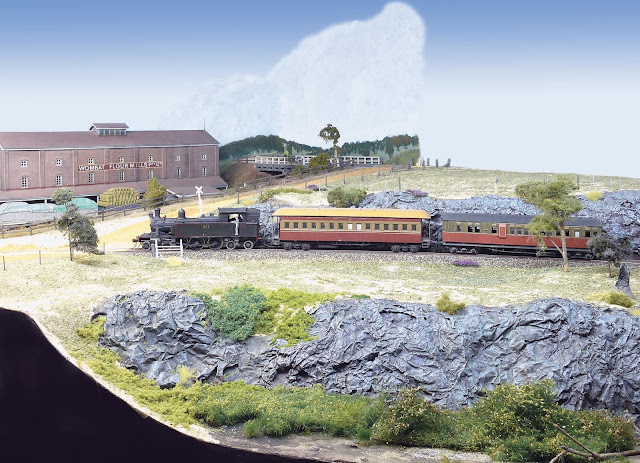 Another view of the scene with an ancient (visiting) Berg's 30 class tank passing on the school train. 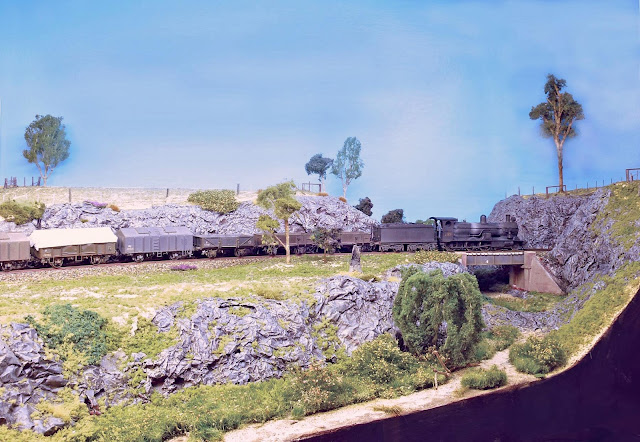 By 6 March a lot of extra scenery detail had been added, courtesy of Woodland Scenics and miniNatur! 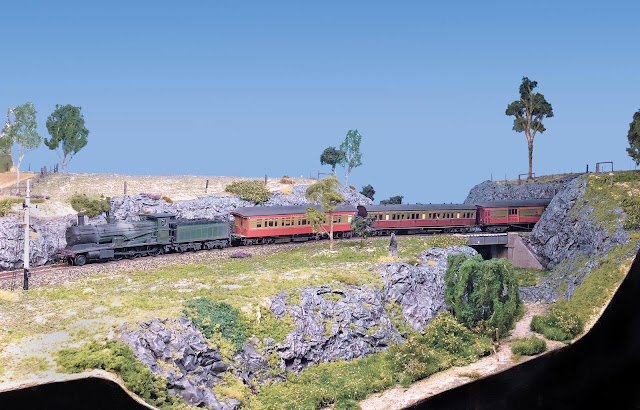 The home signal had also been completed and temporarily added to the scene. 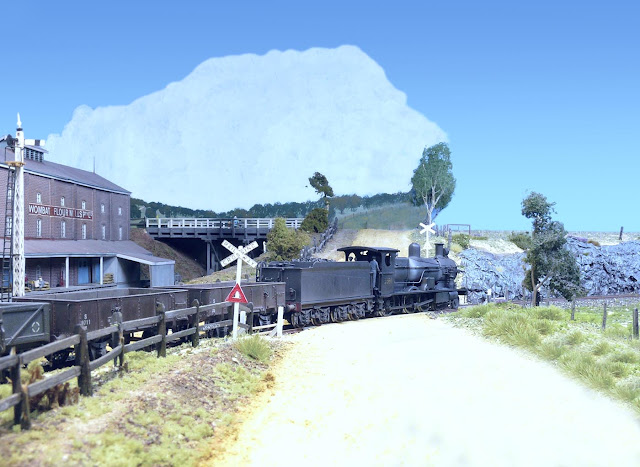 The grass tufts and other material available from miniNatur allow a lot of fine scenic detail to be added quickly. 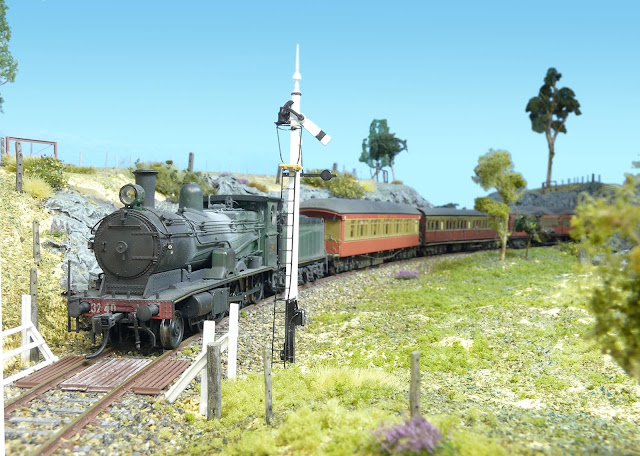 More scenery, including some nice 'Patterson's Curse' using miniNatur material. The home signal is a slightly modified Uneek casting that has been made to work.
Not much was done between March and September (soccer season!), but during October a few more items were completed, some of which are shown below and some of which will be detailed in future posts. 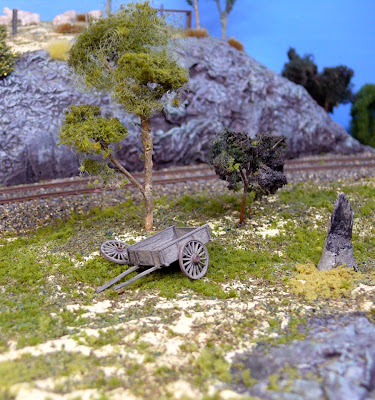 More scenic detail, this time a Uneek horse cart that has lost a wheel and been abandoned near the creek.

A 'panoramic' view of the junction taken on 9 November 2012. The junction has been named 'Back Creek Junction', a very typical Australian name for a creek and also the name of a real creek in my home town, Young NSW, which is where Lambing Flat is supposedly set. 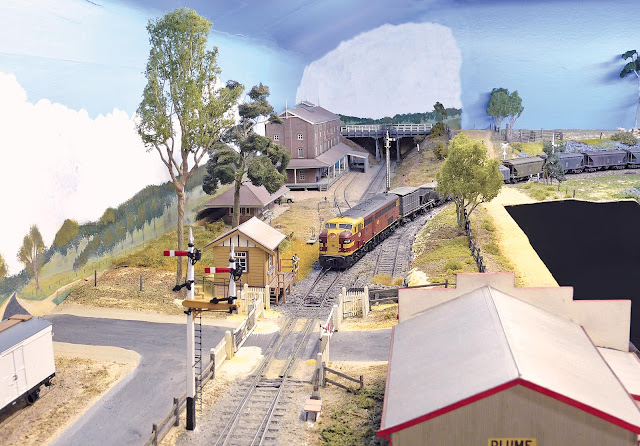 A closer view of the junction as it is on 9 November 2012. The junction bracket and the new signal box have been installed and final detailling of the scenery is proceeding.
However, the focus of new construction has now moved to the other end of the layout... 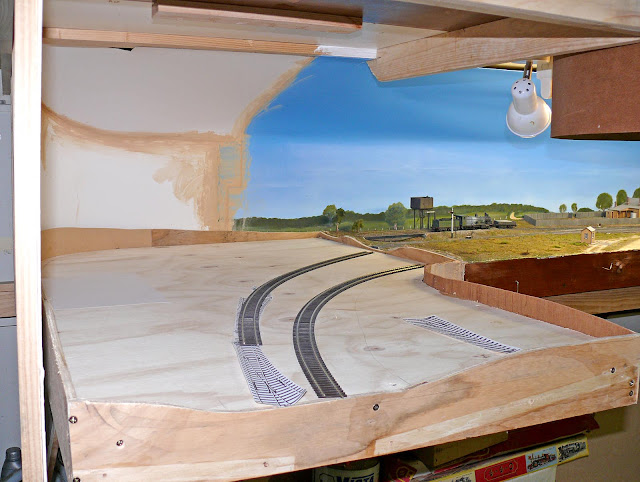