The Indian red diesels need something to haul, so, thanks to all the lovely r-t-r 1960s/1970s bogie rolling stock now available, it is a simple matter of pulling something out of the box, checking the couplings and wheels against the standards gauge, weathering it and putting it on the track. So easy!

Here are some details of some of the 'bogie exchange' vehicles that have joined the fleet recently. 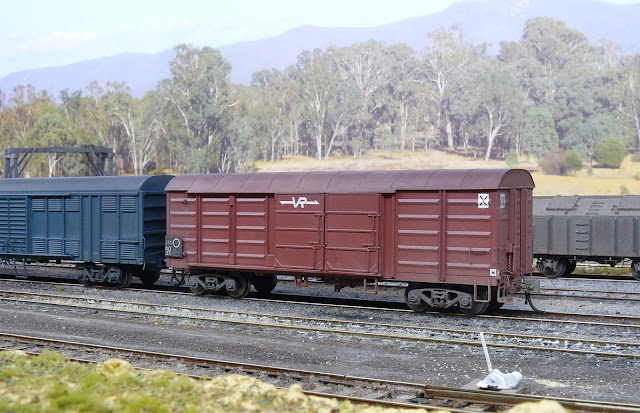 This is an On Track Models BLF that I converted to a BLX about two years ago. I wanted a 1960s era BLX for Lambing Flat, but didn't want three of them, so I purchased a single-pack BLF from Barnes Hobbies in Newcastle and, since a broad gauge only BLF wasn't *quite* right for NSW standard gauge Lambing Flat, I spent an hour or two modifying it. First I replaced the spoked-wheel broad gauge appropriate bogies with a pair of 'bogie exchange' bogies from the spares box (from under an On Track LLV, I think), then carefully removed the 'F' from the BLF code with a toothpick moistened with Metho. When that was done I put an 'X' in its place (SEM decal sheet, I think), then covered the 'P' plates with 'X' decals from a BGB decal sheet. Then I cut some 2" x 4" timber and 'bodged up' the shunter's steps to something more closely resembling the timber version more appropriate to the period. After a couple of years in 'pristine' condition, I finally got around to weathering it, lightly, as befits my era, with airbrushed Tamiya and Aqueous Hobby Color acrylic paint. 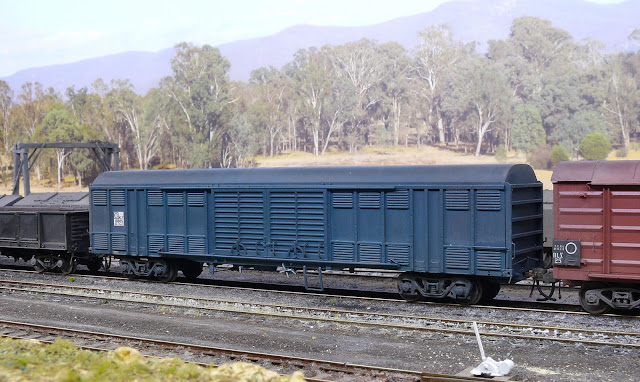 This is an Auscision KLY in PTC blue. It is a little late for LF's 'core' period, but I do like the KLY vans! I lightly weathered it to represent a very new vehicle that hasn't managed to acquire more than a light coating of road dust, once more with airbrushed Tamiya and Aqueous Hobby Color acrylics. However, I wasn't happy with it, as it looked a little too clean, so I came back a couple of weeks later and added some more 'dirt'. Much more as I remember them now. 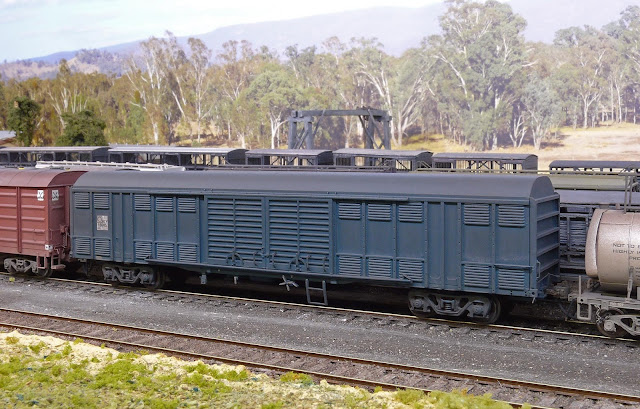 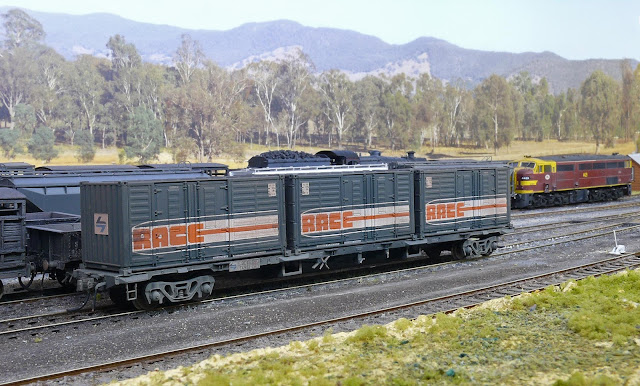 In keeping with the 1970s PTC blue theme is this SDS OCY, carrying a load of RACE containers. Another one lightly weathered to represent how I remember OCYs from the 1970s. Below is another shot, this time without the containers, showing the grubby deck. 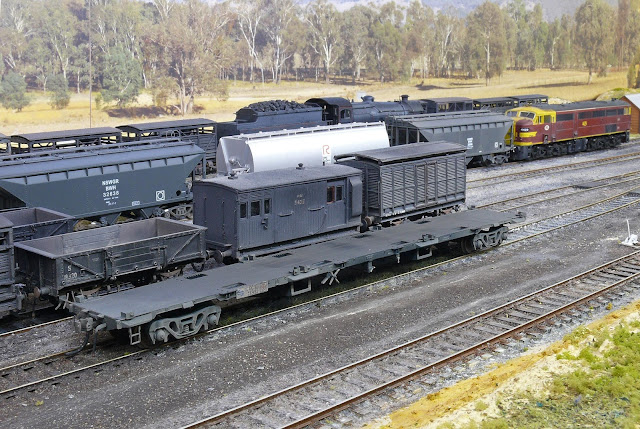 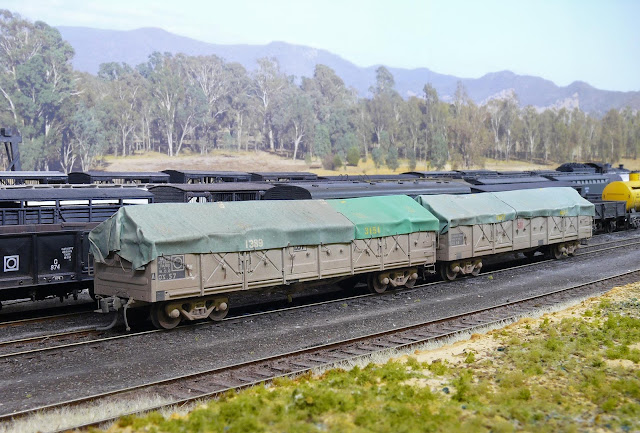 This is a pair of Orient Express Reproductions r-t-r OX SAR open wagons, fitted with tarpaulins, as the lack of interior detail does look a little strange on the layout. The vehicles themselves are straight 'out of the box', except that the far vehicle has had a red SAR logo added. The wagons were then weathered with my usual acrylic paint diluted in Isocol alcohol method and then some tarps, made from some old BGB printed foil tarps I have had 'in stock' since the early 1980s were added. The tiedowns are thread, superglued to the tarp and the vehicle. The tarps were sprayed with flat clear once they were fitted, to kill the sheen of the original BGB item. A light spray of Tamiya XF-52 Flat Earth was then 'misted' over the tarps (and the wagons) to 'tie it all together'. 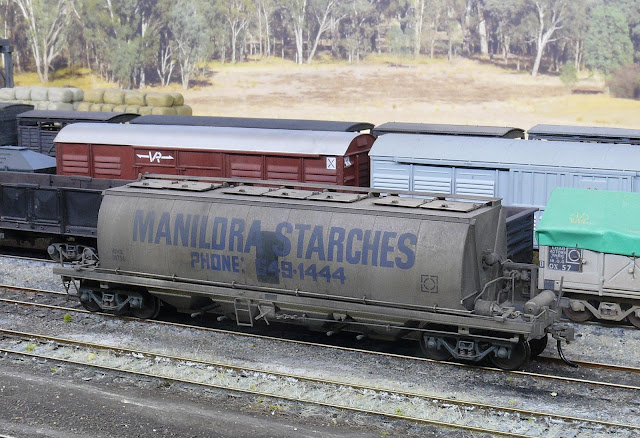 This is an Austrains 'Manildra' WHX fitted with SDS exchange bogies and the black panel where the old code was added penned in with ink. The model was then sprayed with flat clear to seal the ink and then it was weathered using my standard sprayed acrylic method. I'm very pleased with the way this one has come up. Below is another shot with the yard looking very 'late 1960s'. 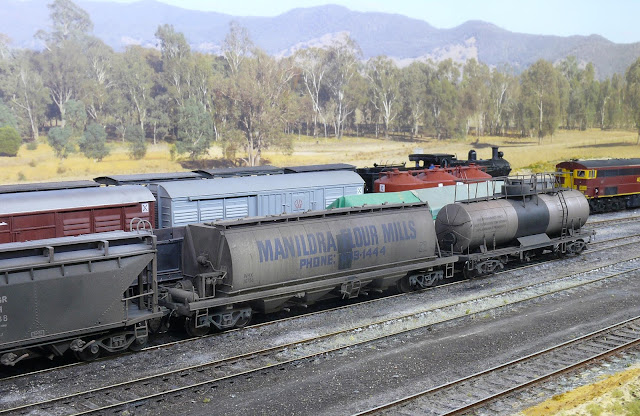 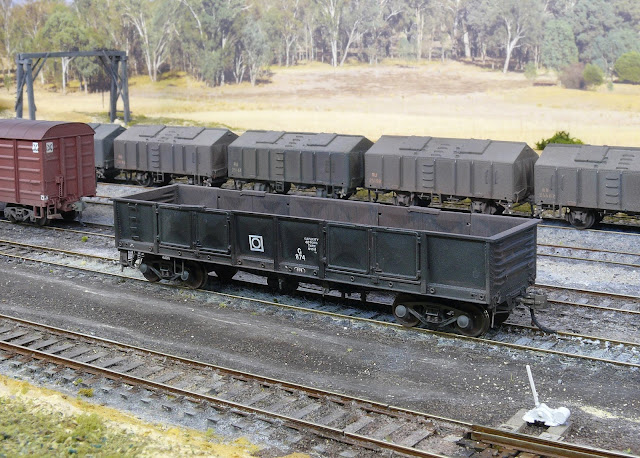 While not quite 'bogie exchange' vehicles, (for bogie exchange we need the GX subvariant) this pair of Eureka G wagons fill the need for high speed capable bogie open wagons on the Sydney-Melbourne corridor. Despite having been introduced in the early 1950s for coal haulage, photos of 'high wheeler' mainline trains in the 1960s show plenty of G type wagons in use and most are in pretty good condition, so these two were weathered accordingly. 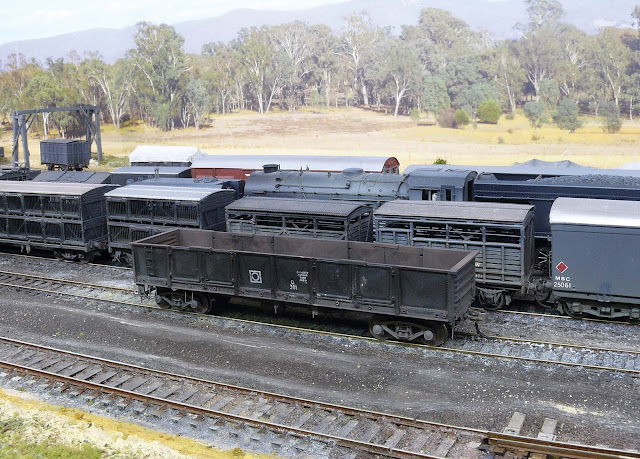 Not everything new on the layout is r-t-r; the occasional kit-built model still sneaks through! This is a NSWGR BDX constructed from a AR Kits injection-moulded kit. I hadn't built an injection-moulded plastic kit for a very long time, but it had come to my attention that one major class of late steam/early diesel era rolling stock was not represented in Lambing Flat's collection, the BDX bogie open wagon. An opportune purchase at the 2017 Brisbane exhibition recently addressed that oversight and, in something like record time, the model was assembled! Of course, it isn't built as the manufacturer intended (something I never do!), but has had some extra detail added to represent the appearance of one of the 1963/1967 batch as it may have appeared towards the end of the 1960s. As I hadn't been able to find many decent photos of BDX wagons from that period while I was building it, there was a certain amount of guesswork involved and I eventually found out (after it was painted!) that the top right handrail wasn't quite in the right position! As with the rest of them, the photos I have of them in the late 1960s show them to be in quite good condition still, so it was weathered accordingly. 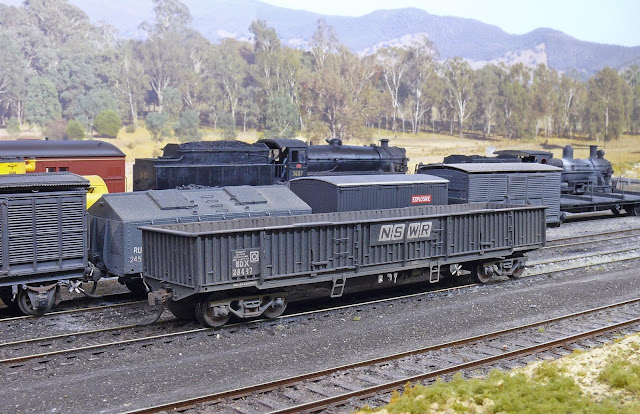 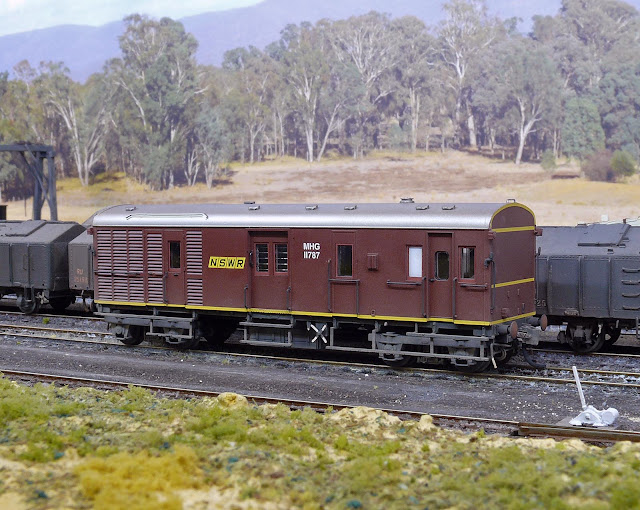 Of course, if one is going to run post-1966 goods trains, one should have the occasional 'red' van to put on the back. As I only had one (the Trainorama GHG with InFront Models dress-up kit I reviewed in AMRM Issue 287, April 2011), I thought it was about time I had another one, so this Trainorama MHG had the handrails and lampirons picked out in black and then lightly weathered to represent a newly rebuilt and repainted van. 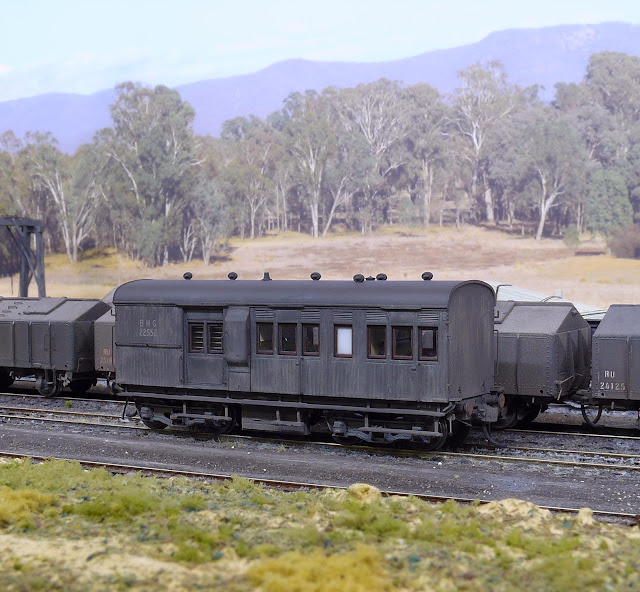 However, the 'high wheelers' of the 1960s didn't only trail nice new Indian red brakevans; there were also the 1920s-built SHG vans that were fitted with new 2AE high speed bogies around 1962 to help fill a desperate shortage of brakevans capable of high speeds to run on the newly-opened 'Gauge' to Melbourne. The release of the SDS SHG/BHG brakevans gave me the opportunity to add a BHG to the collection (I already had two kit-built SHGs, so only a BHG was acquired). Unlike the other goods vehicles shown here, where I went for the fairly new, lightly weathered effect, this BHG was heavily weathered to represent the appearance of the prototypes in the 1960s. I really like the attention to detail that SDS have given to this model and I particularly like the Indian red window frames, which was so characteristic of Gunmetal grey brakevans in the late 1960s.


That's enough for now (there is a lot more to come!). Next time I will describe the huge number of new four-wheel and bogie 'intrastate' vehicles that have also joined the fleet.

Posted by James McInerney at 00:15